Every month, films from the Library’s collection are shown at the Mary Pickford Theater in the James Madison building, ranging from titles newly preserved by the National Audio Visual Conservation Center film lab, classics from the National Film Registry, and lesser known titles worthy of discovery. 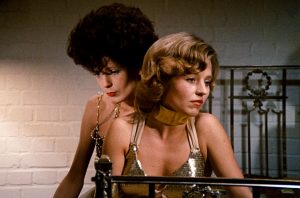 The library celebrates LGBT Pride Month with a seminal work by German filmmaker Rainer Werner Fassbinder, a giant of world cinema whose short but extremely prolific career produced more than 40 features, two dozen stage plays, and a groundbreaking TV series (Berlin Alexanderplatz).  Focused on a tormented romance between a successful fashion designer and an aspiring model, “The Bitter Tears of Petra von Kant” is a reflection of Fassbinder’s recurring interest in stories of same sex lovers of different social and economic standing.  It was based on the director’s own play, a painfully personal account of his affair with a young actor, and shot as a chamber piece on a single set with a six member all-female cast.  Campy and highly aestheticized, with mesmerizing camerawork and powerful performances, the film is a disconcerting, claustrophobic, and emotionally wrenching experience.  Print courtesy of Janus Films.

Seating is on a first-come first-serve basis.  Doors open at 6:30 pm.

For more information on our programs, please visit the Mary Pickford Theater website.

The Mary Pickford Theater is located on the 3rd floor of the Library of Congress James Madison Building, 101 Independence Ave. SE, Washington, DC, 20540.